Focus! (Avoid potted histories establish a central argument/line of enquiry that you will develop.

Political and aesthetic movement beginning 1916 as a reaction WW1 which spanned performance, writing, and film
blurring boundaries
Dadaists saw the need to destroy, disrupt and tear up established forms, in order to reorder and repackaged them as Dadaist art.
Anger, destruction, anti-war
Political, absurd and comic
Max Enrst: ubu imperator (1923)
Dadaist, graphic artist, Monty Python
“Gaga for Dada” from BBC iPlayer
“Who’s afraid of conceptual art?” from BBC iPlayer
Some conceptual art work examples:
-words in the space/streets/building with a deep inspiring meaning
-being in a room with a real coyote for 3 days (firstly the animal is biting and attacking the artist, later on they start to accept each other and by the end of the experiment they have reached to a positive kind of relationship)
-a ball of paper in a box
-a tin of ‘artist’s shit’
-a self playing piano (playing The Moonlight Serenade) getting signals that have been sent from earth to the moon and then coming back.
-Cornelia Parker Cold Dark Matter: An exploded view
Conceptual art is about the IDEA not the item, action, object or whatever result.
The process derived from the IDEA is what’s important not achieving the result.
Therefore: the concept is the key.
Howard Barker’s Theatre of Catastrope:
Art is not digestable, it’s an irritant in conciousness, like the grain of sand in the oyster’s gut.
The audience is always sole persons but not a mass. – Howard Barker’s opinion.
Prologues: The Bite of the Night
Although one’s not sure why, they’re inspired or feel involved with art, not in order to get entertained, but to experience something different and original from the everyday life.
Art must gain social value
If art is a sake of art where the connection
How to make a dadaist Poem method of Tristan Tzara: 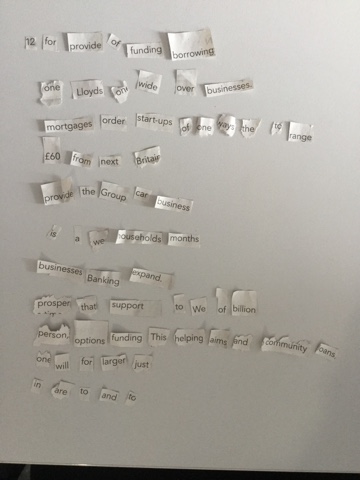